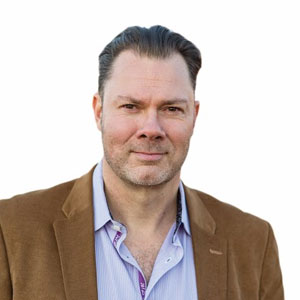 Today automation has become a priority for every industry, arguably as much as it once was for the manufacturing sector. Cost-cutters love it. Workers fear it. Yet, for most in the business process arena it has long been anathema— something which runs counter to the notion of continuous process improvement and improving knowledge workers’ work. For years the BPM sector has said, “We’re designed for high-value work, not straight-through processing” and other sentiments dismissive of the notation that automation could offer any lasting value. Indeed it is true that business automation systems (including both mechanical and software-based) for decades were designed and built in the same manner. Industrial engineers designed the ideal routes to move packages in the most efficient way possible, and indeed these pathways are fixed. The challenge with that model of automation is that rigidly following fixed pathways are not consistent with the way we work.

Since it not possible to fully script out in advance the sequence of steps and end-to-end processes without knowing the exact context of any given task we will be performing, we conclude this work is “un-automatable.” For this reason process automation to date has largely been limited to repetitive and relatively simplistic process areas. In contrast, process management, delivered via BPM platforms, has been applied to very nuanced and complex work. BPM involves more than system-to-systems, such as facilitating the sequencing of activities, managing the passing of state and control from one entity to another.

Yet by leveraging complimentary capabilities, we can expand the range of what can be automated, driving both continuous improvement and efficiency gains. Delivering “intelligent” automation with BPM reflects not necessarily a category of software, but rather a design pattern for leveraging best of breed COTS components. At the foundation is a data layer. Not necessarily part of a BPM Suite, but where you would find the operational data store (ODS) and one or more systems of record (SoR). Above the data services layer are three logical layers, components which deliver the “brains” of intelligent automation. These might be part of pre-integrated suite, however, in the current state of the market there is great opportunity for assembling best-of-breed component (either commercially licensed of open source) consisting of BPM suite (BPMS) plus decision automation as well as robotic process automation (RPA).

Synergy between these components is inherent, and while truly leveraging this requires a well-thought out, unifying architecture, integration is best when loosely-coupled and data-driven (not forced). There is an implicit separation of concern between each component. Whether they’re from the same vendor or multiple, each component will have its own design-time environment and event model. Just each serves its own purpose. Ultimately the BPMS is the orchestrator and the interface. As RPA by itself has no interface it acts on behalf of the knowledge worker. The “robots” automate functions that human users would otherwise perform, and to the BPMS appears as either an automated service or just another user. The decision automation (or decision management) component is more than business rules engine or BRE (already a component of most BPM suites). Rather it is a relatively new category of software which facilitates the definition and on-going management of rules and policies as distinct artifacts and business assets. For example, the complex and often fluid set of policies which determine how decisions are made generally require interpretation by subject matter experts. These complex decisions are what most often are seen as the barriers to automation. Yet, these decisions can be modeled, not as workflows but using decision-specific method such as the OMG’s DMN (decision model notation.) These decision models do not automate, per se, the “answer”—it takes event data and turn that into an outcome. That outcome presents data which drives the next step of the process. 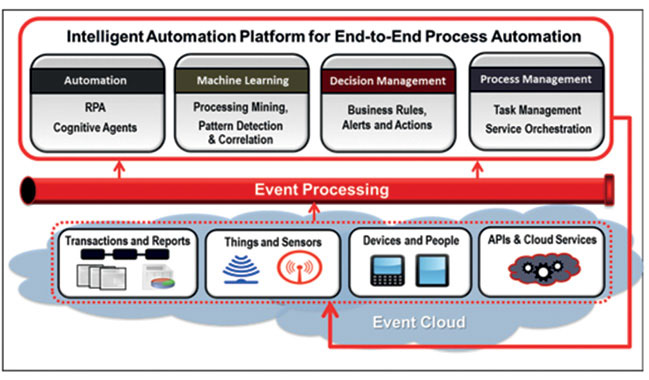 Tackling the End to End Process

What it does best, truly better than any other type of software, is coordinating the end-to-end process by managing the sequencing of steps and state of process as it advances the span of control from one step to the next. Now with the much finer grain definition of how work must be performed, consider that many of the steps which had previously required human intervention can now be performed by software robots, coordinated by the master process, with the instructions provided not by an automation script, but a complete set of rules and policies which are scalable to the complexity of your business. Over time the scope of this automation can grow to encompass an increasing number of erstwhile human tasks, as performance data is captured and more is understood about how the work should be performed.

This is the promise of intelligent automation for supporting knowledge workers, and ultimately enabling intelligent adaptability, by leveraging RPA, AI/machine learning, decision management and BPM to drive greater quality and efficiency as aligned goals, not competing ones. Leveraging BPM over other modes of process automation expands the range of what can be automated or otherwise managed. It is the combination of process, rules and data which frame today’s BPM platforms which enables “intelligent automation.”

Today’s BPM platforms deliver the ability to manage work while dynamically adapting the steps of a process according to an awareness and understanding of content, data, and business events that unfold. This is the basis of intelligent automation, enabling data-driven processes adapting dynamically to the context of the work, delivering the efficiency of automation while leveraging rules and policies to steer the pathway towards the optimal outcome. For these reasons BPM is the ideal platform for digital transformation. Not old wine in new bottles, but the critical leverage point for capitalizing on digital disruption.

OpenText: Unleash the Power of Information

Unlocking the Value of Connected Cars

Comprehensible Distribution of Training and Information...

The Current Focus is On Comprehensive Solutions

Big Data Analytics and Its Impact on the Supply Chain

Carmax, the Automobile Business with IT at the Core

The CIO's role in rethinking the scope of EPM for...

Transformative Impact On The IT Landscape

Get Ready for an IT Renaissance: Brought to You by Big...

Technology to Leverage and Enable

Speed is the Name of the Game

What It Truly Means For IT Security To Bea Business Enabler

Policy is a Key Solution to Stopping Packaging Waste

Congestion-Driven Basis Risk, A Challenge for the Development of...

However, if you would like to share the information in this article, you may use the link below: